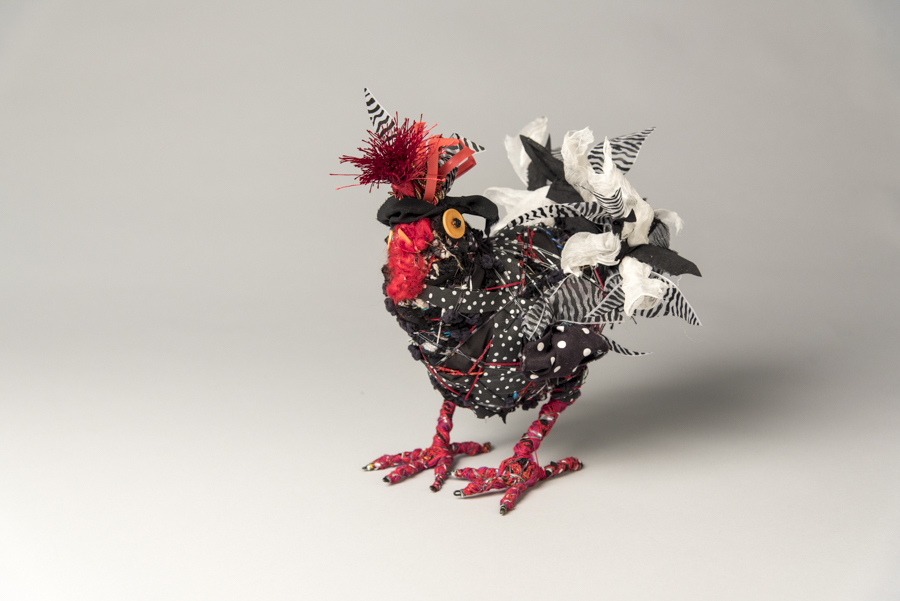 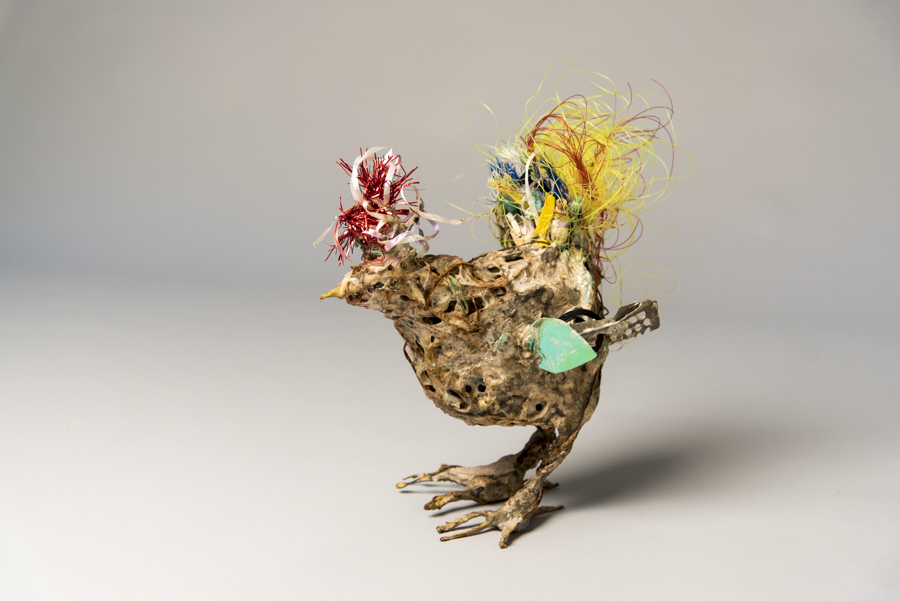 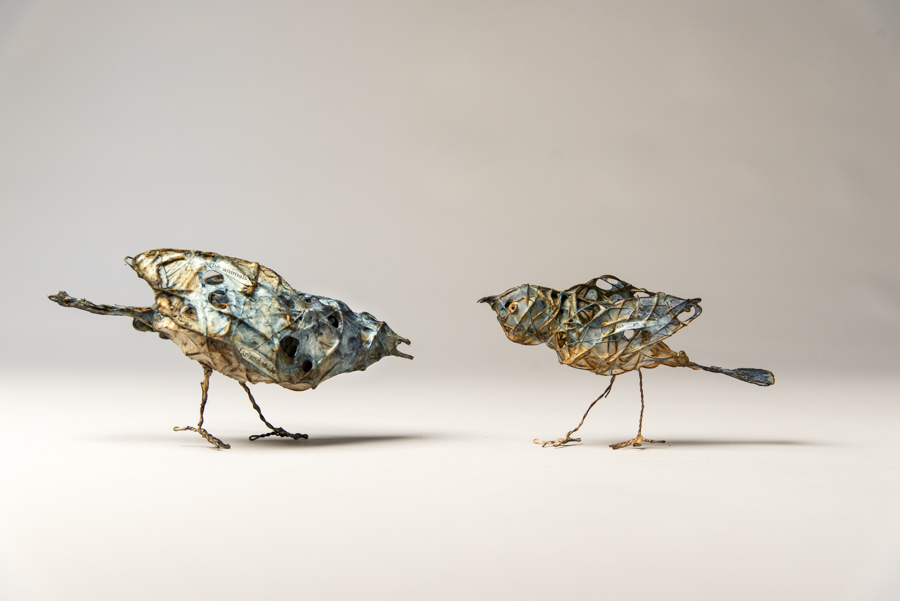 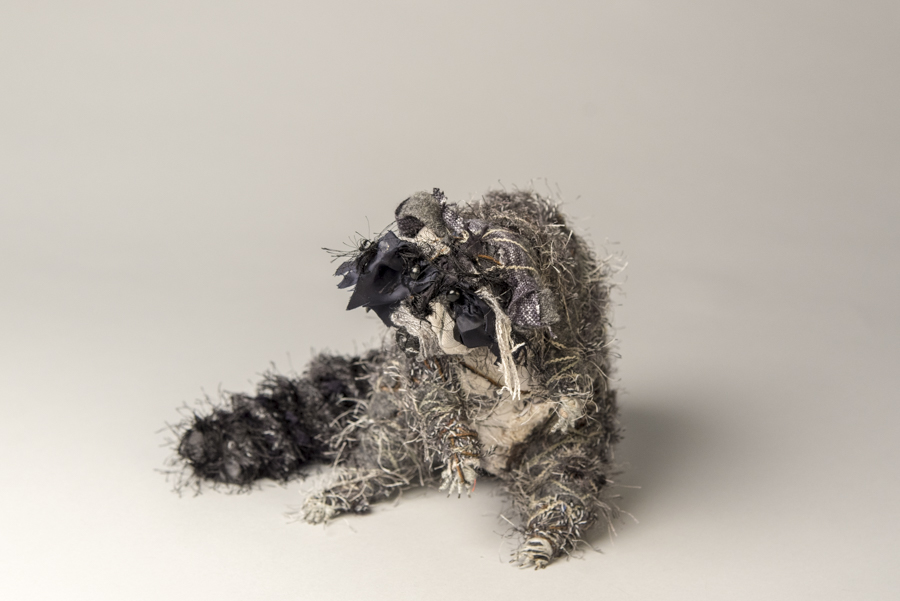 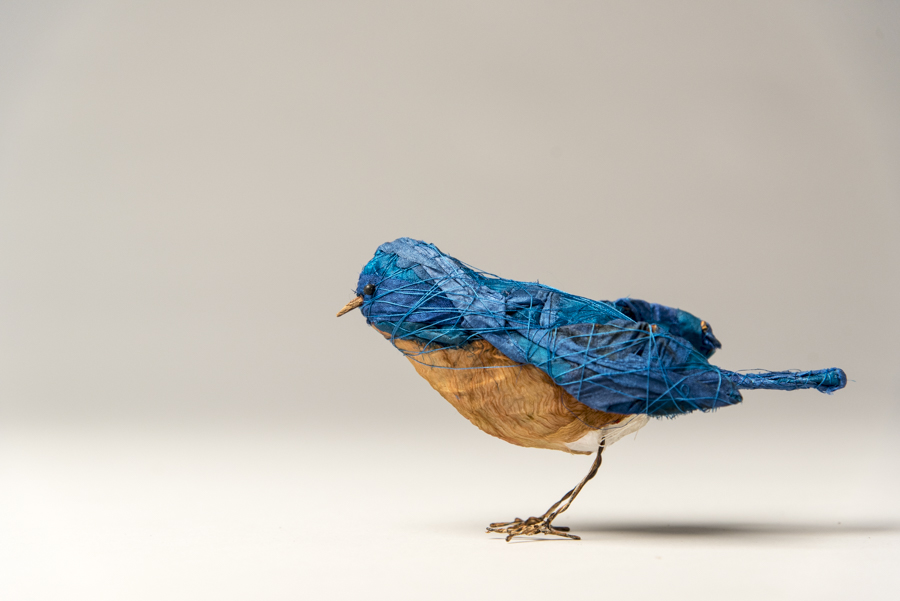 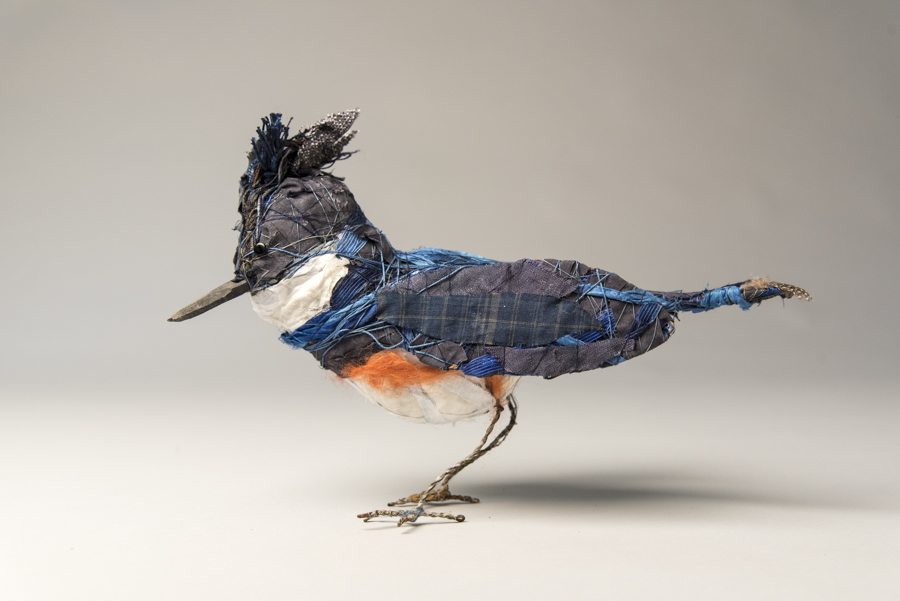 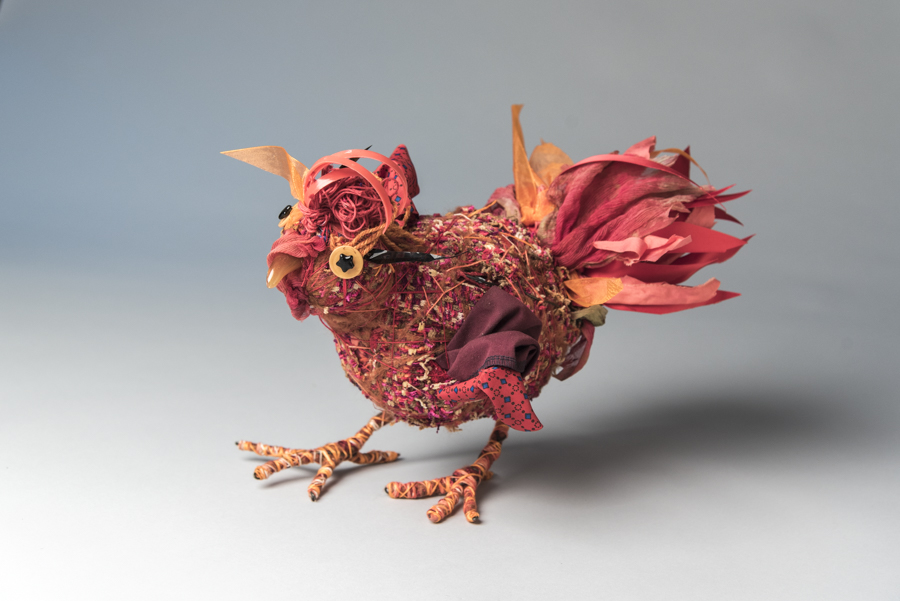 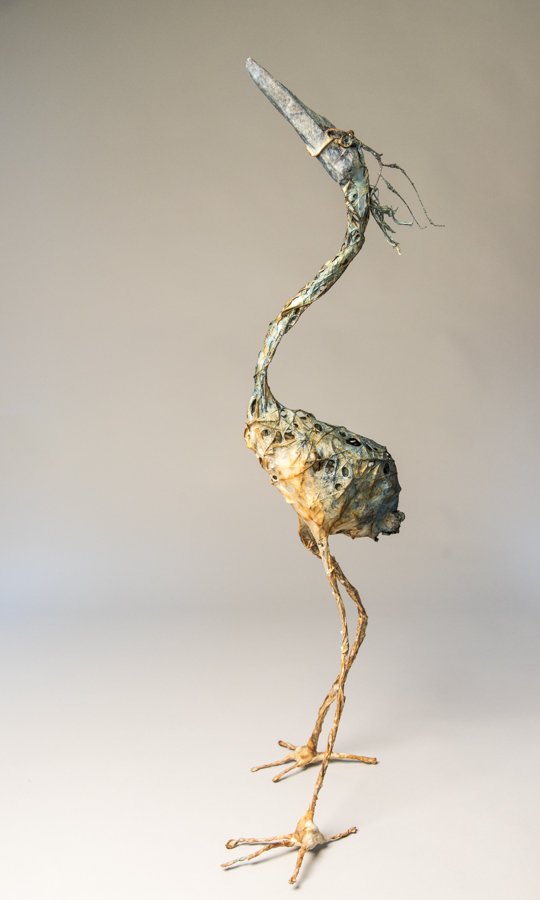 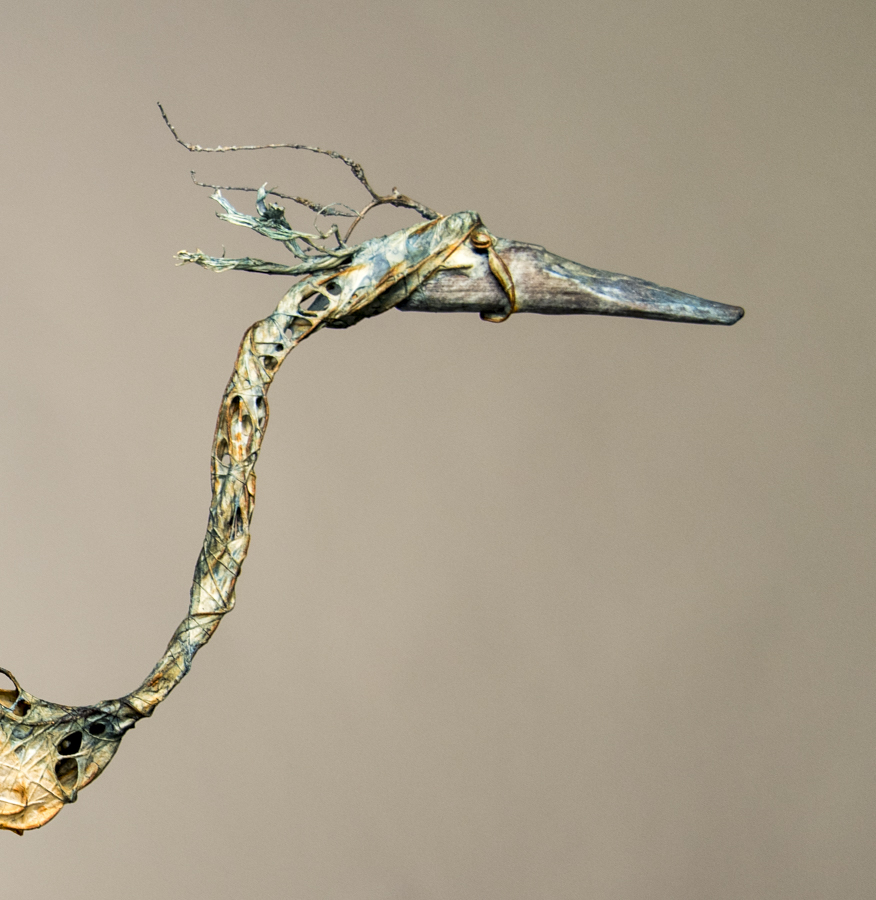 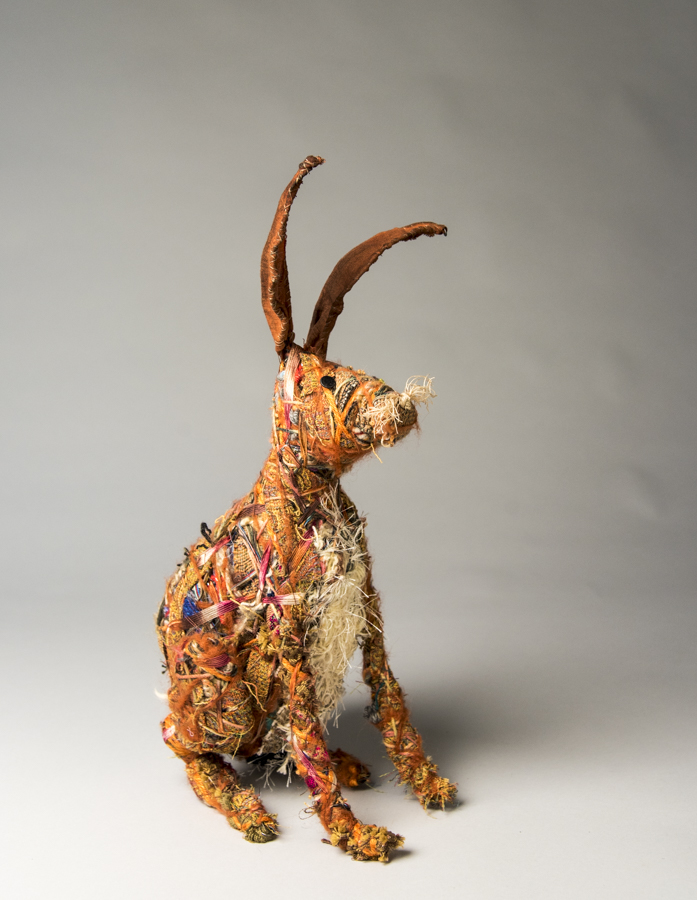 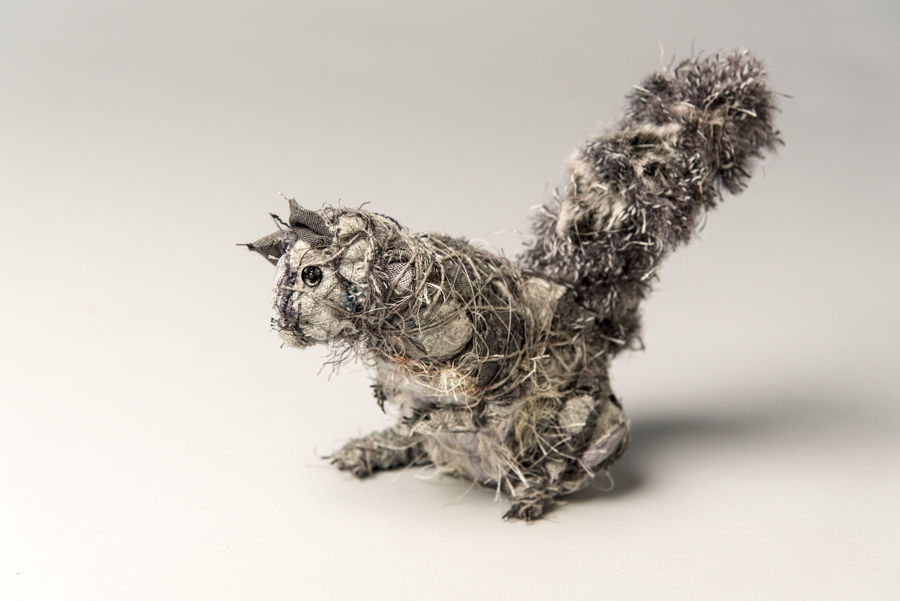 BRYANT HOLSENBECK
ANIMALS IN THE HOOD 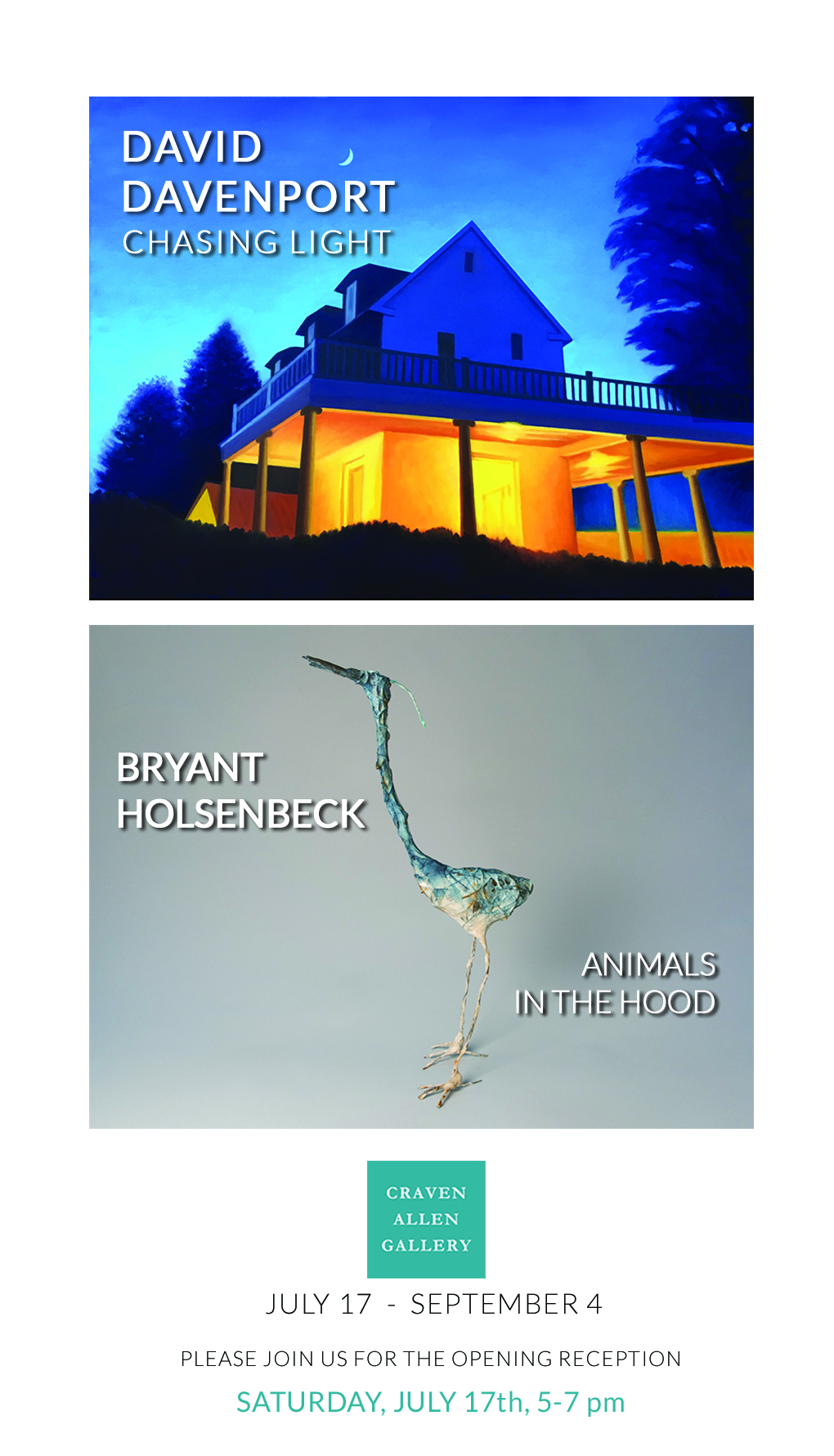 “Some people talk to animals. Not many listen though. That’s the problem.” ― A.A. Milne

I make the animals I see around me. They inspire me and give me hope. They are beautiful. They are survivors of our own human neglect and greed. I feel such gratitude for them.

I watch for animals all the time. Where I live, I can see birds, squirrels and rabbits in my yard. Occasionally a chipmunk appears. Last spring, hearing a large snuffing sound underneath the floor of my tiny backyard studio, I looked out to see a possum coming out from under it. Years ago, (and not by choice) I lived with a large Norwegian rat who had crawled down my then unscreened chimney shaft. For months I would see a sudden movement out of the corner of my vision and wonder. When we finally spotted each other late one night, eye to eye, we both screamed as loud as we possibly could.

Last week a friend and I watched a great blue heron land on the top of her neighbor’s tall pine tree.  Where did it come from and where was it going?

Mice love my backyard studio, especially in the winter when it is cold.   One sunny afternoon a few weeks ago, I noticed movement outside my studio window. Looking up, I saw a Coopers Hawk on the ground with something in its claws.  The hawk and I stared at each other for a minute or so and then in what seemed a single movement, a few small brown bird feathers floated down and the hawk was gone.  A few months back, I was driving down Hillsborough Road when I saw a crow with a fast food wrapper in his talons flying above me crossing from Bojangles to McDonald’s. Slugs and mosquitos. Bats and rats. Raccoons. Earthworms, snakes, butterflies and dragonflies. And hope beyond hope, bees.

I feel fortunate that somehow despite it all a world of wild animals lives around me.  As we remove their natural habitats somehow these animals continue to live.   So far, with wild life, trees and forests, rivers and lakes, we human animals, together make up the precarious web that is our life.

“For instance, on the planet Earth, man had always assumed that he was more intelligent than dolphins because he had achieved so much—the wheel, New York, wars and so on—whilst all the dolphins had ever done was muck about in the water having a good time. But conversely, the dolphins had always believed that they were far more intelligent than man—for precisely the same reasons.”   –Douglas Adams Hitch Hikers Guide to the Galaxy

Holsenbeck is an environmental artist who makes large-scale installations and small-scale sculptures that document the waste stream of our society. Understanding that there is no “away,” that there is only out of sight, she has been making art out of societal cast-offs in an attempt to draw people’s attention to how much we throw away and to encourage individuals and communities to be better stewards of the environment.

She has shown her work and taught throughout the United States and Australia. She has been the recipient of two  North Carolina Arts Council Fellowships, a Project Grant and an NEA Arts and Learning Grant that she worked on in collaboration with the Chapel Hill Public Arts Commission. In 2013 she was an artist in residence at Moulin à Nef in Auvillar France.  She is currently featured in a short on WUNC television about her work.

Her recent book, The Last Straw: A Continuing Quest for Life Without Disposable Plastic, about living for a year without disposable plastic, is the subject of short documentary on WUNC-TV.  Her work is collections all over the United States. This is her second show at Craven Allen Gallery. She lives in Durham.

I use the materials I find around me to make the animals I see around me. I use fabric scraps, plastic bags and found objects, natural and man-made. A bird beak might carved out of a found piece of wood or a bent piece of plastic, whatever looks right at the moment. Concerned about how animals survive as we take away their habitats, I use the stuff we “throw away” or do not need any more to make them.  Many friends give me yarn and fabric. Often, I find bags of these on my front porch. The Scrap Exchange is where I go to look for cloth or string or buttons if I need them.  The herons have bits of plastic savaged from the ocean in them.  Currently my rabbits and hens are filled with the smaller studio scraps I have made since I began making these animals.  The scrap artist makes scraps, this is true.

I sketch the animals I make and sketch them again and look at pictures all the time. They are representational, the best I can do at the time. I am always learning a new angle, a new understanding of them as I make them.  First, I make the skeletons, out of wire. Then the process is stuffing wrapping pushing, pulling stuffing wrapping un-stuffing until it looks right to me.  Making these animals is never ending conversation between me and the materials. I never know how they will turn out or when they will be finished—until they are.